Perseverance that Deepens Our Trust in God

Perseverance comes from the Greek word hypomone, meaning “to remain under” and is sometimes translated “patience.” Learning patience is difficult, but important, in our walk of faith. Throughout our lives, the Lord lovingly places us in various trials and tribulations, situations that squeeze and press us. Lovingly?! you may ask. Yes, lovingly. For you see, trials and tribulations are spiritual classrooms for us – places where we are stretched, so that our faith in Jesus grows deeper and is refined. Our earthly difficulties are not without purpose. James 1:2-3 says to, “Consider it pure joy, my brothers, whenever you face trials of many kinds, because you know that the testing of your faith produces perseverance.” And Romans 5:3-4 tells us to, “exult in our tribulations, knowing that tribulation brings about perseverance; and perseverance, proven character; and proven character, hope.”

There are many different types of trials, but waiting seems to be a theme in my own life. Thus, the story of Abraham and Sarah’s waiting for the fulfillment of their promised heir is especially encouraging and refreshing for me. There is much we can learn from examples of the faith of those who have come before us.

Romans 4:20 tells us that “with respect to the promise of God, Abraham did not waver in unbelief but grew strong in faith, giving glory to God,” yet when we take a look at the account of Abraham’s life in Genesis, we can see what appears to be faltering or wavering faith. However, the word waver in the original text means “to separate belief from one’s mind.” This is God’s way of giving us insight into the heart of Abraham’s faith; though he may have wondered how and when God would fulfill His promises, Abraham never separated belief completely from his mind. He didn’t doubt that God could do the things He had promised. What faith to stand upon!

Abram was 75 when God first called him and gave him the promise that He would make Abram into a great nation (Genesis 12:1-9). As with many of us at the beginning of a journey, Abram was excited. He obeyed God immediately, and he worshiped God often. But as time wore on – 11 years – fear and doubt began to spring up in Abram’s heart (Genesis 15). He and Sarai were childless; how could he become the Father of a great nation without an heir? God responds to Abram’s fear with His comfort. God reminds Abram of His promises and gives him a covenant.

Sarai also had doubts rising up in her heart, and she allowed them to take root and grow into action (Genesis 16). Maybe God needed some help. Since she couldn’t see or understand how God was going to fulfill His promise to them, after waiting for 15 years now, Sarai tried to make it “work out” in her own plan – she gave her servant Hagar to Abram, and Hagar conceived and bore a son, Ishmael. But this was not the Lord’s fulfillment.

Even through this impatient, “controlling” action that both Sarai and Abram displayed, God continued to comfort, encourage, and remind them of His promises. He blessed them and changed their names, Abram to Abraham “father of a multitude” and Sarai to Sarah “princess” (Genesis 17). God’s promise never changed, even over decades of waiting. Yet Abraham and Sarah were in disbelief. They laughed because they saw God’s promise as impossible (Genesis 18:10-15). Sarah was too old, and her body was physically beyond fertility. It was too late. From a human perspective, it was impossible.

But, “In hope against hope [hope in God vs. hope in man], Abraham believed, so that he might become a father of many nations according to that which had been spoken, ‘So shall your descendants be.’ Without becoming weak in faith he contemplated [analyzed] his own body, now as good as dead since he was about a hundred years old, and the deadness of Sarah’s womb; yet, with respect to the promise of God, he did not waver in unbelief but grew strong in faith, giving glory to God, and being fully assured that what God had promised, He was able also to perform” (Romans 4:18-21).

Abraham analyzed the situation – BUT he gave greater weight to God’s promise than to his contemplating. As believers today, we have the entire Bible in addition to our own personal experience with the Lord to look back and see God’s character, His power, and His faithfulness. Abraham didn’t have nearly as much past to look upon, but he had enough evidence of God’s character to fully trust Him. Abraham had the example of Creation – God can make something from nothing. So when he looked at the “nothing” he and Sarah physically had in their bodies, he knew that God was able to provide for them.

And God did the “impossible.” With Abraham 100 years old (after TWENTY-FIVE YEARS of waiting!), Sarah bore Abraham a son (Genesis 21:1-7). The promise had been fulfilled, and it was right on time. Not a single moment of the waiting was wasted. God, in His perfect wisdom, had designed it, and He was stretching and molding the faith of Abraham and Sarah to make them more like Christ. He was developing perseverance in their hearts, which proved their character, and brought them to an eternal hope, the confidence of future fulfillment.

When we are in the spiritual classroom of a trial, we can feel helpless and impatient. We can doubt God’s ultimate purpose. We can try to understand what He is doing, or tell Him how we think things ought to be. We can try to figure out a solution on our own to “get out of” the uncomfortable pressing. We can allow our doubt to grow into rash actions that reveal the distrust in our hearts. But God is so much more powerful than the parameters of our physical world. He does not need to work in ways that are “possible” according to our understanding. In the midst of our trials, we can exult because of the confident hope we have in our glorious God. 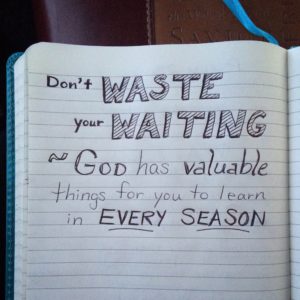 So let us not waste the valuable time God has given us. While we are waiting for the perfect fulfillment of our own prayers, may we use each precious minute (which is lovingly planned for us) to trust this amazing God of ours and gain contented perseverance as we grow deeper in our walk by faith.