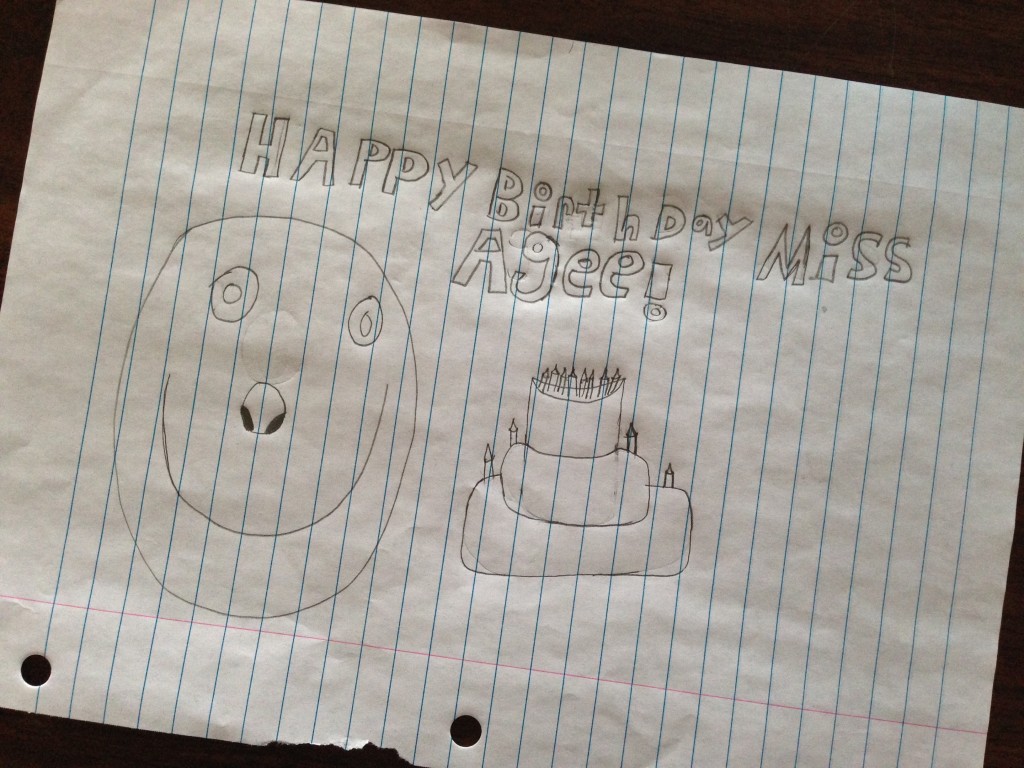 January 9th: A Gift Held, Passed By, and Sat With

Today I am thankful for:

1. A Gift “Held”: One of my 5th graders, who happens to also be my most difficult student lately, surprised me with a birthday note today…even though my birthday isn’t until the end of the month. Made my day. :)

2. A Gift “Passed By”: I have now safely and successfully driven 10 times past the spot where my car accident happened–to and from school every day this week. After spinning through the median/ditch in the middle of the highway during the accident, my car hit one of the small mile marker posts. I remember seeing it flash in front of my windshield and also noticed it in the police report pictures. But what I just noticed today as I passed by was how CLOSE that mile marker is to a REAL sign. The little mile marker post bent over easily (and is still bent over), but the metal post for the sign would not have bent like that. There’s only a foot or two between the signs. So not only was I close to being hit by a semi and within inches of being hit by oncoming traffic…but I was about a foot away from hitting a sign that would have caused more damage to my car. In realizing this–yet another detail that was carefully planned out by my Sovereign Lord–I am thankful.

3. A Gift “Sat With”: In math class, today was our last day working on finding the volume of a figure. My student Nicole has struggled all year with the process of multiplication when it involves double digits. During today’s classtime, I mostly floated around the classroom while the students were working, giving help where it was needed. Then I spotted an opportunity to help Nicole because she was struggling again today. I sat with her for a few minutes and walked her through some problems, gradually releasing more of the responsibility to her. At the very end of class, I told her that I wanted to see if she could solve one all by herself. So I walked away. Right as I was dismissing the students to turn in their work, she came up to me to check her answer. It was correct! As I cheered and gave her a high five, her face broke into a huge smile. The time I had taken to sit with just one student made a difference today.